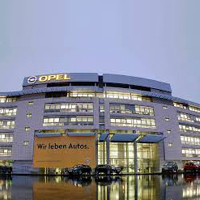 Ruesselsheim.  On top of four Insignia variants and the Zafira Tourer, which will be produced as of January 2015, the Ruesselsheim plant will get two additional vehicles later in the decade. This was decided by the Opel Supervisory Board at its meeting this week.

A significant investment of 245 million euros will be made to build an additional model. Due to competitive reasons, details about this car will not be announced until the end of the year. The Supervisory Board also gave the green light for the future production of an additional variant of the Insignia. The Ruesselsheim plant has been chosen for the assembly of a future model which will be sold in the US under the Buick brand name. Start of production will also be in the second half of the decade.

"With the investment in a new, additional model for Ruesselsheim, we will take another important step in our multi-billion dollar model offensive with which we will pave the way for Opel’s profitable growth,” said GM President and Opel Supervisory Board Chairman Dan Ammann. "And the Buick production in Ruesselsheim will further improve our capacity utilization," added Opel CEO Dr. Karl-Thomas Neumann.

”The decisions of the Supervisory Board for the production of a Buick and for the investment in an additional model for the Rüsselsheim plant are based on the recently concluded collective agreement. They are part of our extended growth strategy and are further evidence of GM’s confidence in Opel," said Dr. Wolfgang Schäfer-Klug, Head of the Opel Works Council and Deputy Chairman of the Supervisory Board.

In addition, Opel has decided to change the export strategy for the Chinese market. As of January 2015, sales of the Opel brand in China will cease. "This is a long overdue decision,” said Dr. Karl-Thomas Neumann. “It would have cost hundreds of millions of euros to raise awareness of the Opel brand and to expand the distribution network. Buick, however, is one of the market leaders in China and we plan to intensify our future collaboration, with several projects currently under examination."

Last year, 22 Opel dealers in China sold a total of 4,365 vehicles. In comparison, Buick – with 650 dealers – sold about 810,000 vehicles in China, including several that were co-developed with Opel.